New Jamaica National Record in the 5000 Meters by Kemoy Campbell 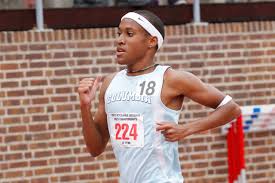 Leighton Spencer runs a personal best of 14 min 16.50 secons in section 2 of the 5000 Meter at stanford Invite

Kemoy Campbell 30 minutes later breaks the Jamaica National record of 13.33 seconds held by Mark Elliott since 1988 with a new standard of 13min 32.82 seconds.

Palo Alto, CA: The California afternoon temperature at the Stanford University campus At Cobb Track and Angell Field  was in the lower 70 degrees at 4:30pm in the afternoon. the athletes for the 5000 meters run scheduled to begin at 8:00pm PST began to arrive at the famed Stanford University Stadium. The evening activites at this meet over the years are legendary. The middle and long distance program have gardenered a reputation that you will be running against the best in the Collegiate USA and track clubs.

As I settled into the stands at the finish line, I noticed that the stadium was emptying out other than a few diehards. Once settled, I never imagined for a moment that I would be witnessing the change in fortunes for the Jamaican ling Distance program. Inever imagined that I would see Leighton Spencer run the fastest time by a Jamaican athlete in three years. I also flet a tinge that I maybe witnessing history with the entry of Kemoy Campbell in the race too. I turned to one spectator and asked to borrow the start list for the 5000 m run. As I skimmed through the list - i noticed that Kemoy Campbell's name was double highlighted in yellow. I started a converation as to the predictions for the race. The gentleman said he is from California and has been following Kemoy's rise for a few years and this was his opportunity to see him run first hand. Not to be surprised, many people mostly coaches knew the gentleman -I did not get his name. But he was popular.

The first of three sectionals got onto the track for the Men's 5000. The race got off slowly, but by the tentth lap it became competitive, Reesey Byers of Sacramento State finishing at 13 minutes 58 seconds.

The second sectional began with the reiging Jamaican Senior National 5000 Meter champion at the start line. Leighton Spencer was anticipating a fast race and also establishing a pretty fast time. The race started out at a 66 second clip per lap. The athletes were tightly packed and if you were not in the front 10; you experienced jockeying problems throughout the race. by the fifth lap out of twelve -I witnessed Spencer having to struggle to get off the rails. Leighton would not be in the winning lot for the evening.

FASTEST TIME BY A Jamaican athlete since 2010 Champs

Young Spencer 4 days older than Kemoy Campbell strived to keep his form during the race, fought through out the tweve laps to be competitve. He rewarded himself by running 14 minutes 16.50 secords. This time was the fastest by a Jamaican athlete over the distance since Kemoy Campbell ran 14 minutes 18 seconds at the ISSA boys and Girls Championship in March 2010.  Leighton also accomplished a personal record over the distance at the same time. At the end of the race disappointment was etched over his face for falling short of his goal of going under fourteen minutes the meet.

The Jamaican National Record: 1st since 1988

The feature race for the evening began with 27 runners toeing the line waiting for the starters gun. Kemoy Campbell could not be missed, since he wore the Arkansas white uniform with lightening bolt stripes on the top. The starter pressed the trigger - bang - the runners started their journey at the 200 meter line; all 27 passed the grand stand for the first time led by two rabbits - Michael Atchoo of Stanford and Mario Bazan unattached. Bazan and Atchoo upped the tempo keeping the pace between 65 to 67 seconds for each lap. Campbell looked relaxed each time he ran pass the grand stand. The track announcer kept blaring out the splits. He mentioned Kemoy Campbell as the young All American coming off a spectacular cross country and indoor season setting records for Arkansas at the same time.

Campbell settled into tenth or eighth place for each lap. With 3200 meters to go the announcer blared out that the projected time would be 13 minutes 40 secords at the current pace. My heart and mind said, well I will not be seeing a Jamaican record tonight. the racers had four laps to go or 1600 meters; the clock read 9 minutes 44 seconds. With four laps at 60 seconds per lap, Elliot's record looked safe. With two laps to go my video camera froze and thus I missed Kemoy' s acceleration on the penultimate lap where he moved from tenth position to fourth.

I got the camera working again at the perfect moment; at the start of the final lap. Campbell was in fourth or third position; on the back stretch - he accelerated to second position with 250 meters to go. Andrew Poore of ADIDAS began his final sprint at the 200M mark pulling away at Campbell. However, Campbell changed gears and began his own acceleration to a higher gear, one that I had not seen before.

At 125M, Campbell's rotation was increasingly faster than Poore's. At the 100m mark- Campbell wa running stride for stride with Poore. It seemed at the 80m mark - campbell said this is enough and changed to another gear running away from Poore to fininsh in a 2nd World lead time of 13 minutes 32.82 seconds. In my excitement I did not hear the time until it was repeated by the announcer. Ladies and Gentlemen - Campbell from Arkansas has ran the second fastest time tihis year in the World. Poore from ADIDAS has the 5th fastest abd Bayer of Indiana has the 7th fastest.

I said to myself, no mention of the Jamaican record!!!,. I turned to the announcer and stated the fact. Kemoy Campbell has set a new Jamaican Senior National Record in the 5000 m here tonight. boy, did he jumpe on the announcement. All of Stanford University including the parking lot heard for the first time officially - tha they witnessed history in the making. The stadium rose to their feet and began to cheer. The media team sitting above me, started to press me for more information on Campbell. They knew what he accomplished at the recent NCAA DIV. 1 indoor championships. The announcer belched out that Campbell broke a 25 year old Jamaican Record.

The only item missing was the Jamaican flag, which my wife turned to me and said - how come you did not travel with yours. The crowd was small when the record was set, but each fan and athelte in that stadium witnessed Jamaican history on the evening of March 29 at approximately 9:05pm.

Marke Feigen of Columbia ran a pb of 14min.02.46 secs that evening. He stated that Kemoy was spectacular that evening. Mark said he never witnessed so much power in a athlete. Leighton Spencer said, he asked Kemoy if the JA record was in jeopary that evening. Kemoy answered that he will see how the race progresses. It progressed to a new record. The Columbia University coach was simply impressed the peroformance. My family too.

In concluding. I have seen many a record set, but none as this one. I have waited for a Jamaican to run a respectable time over this distance for a long time. Kemoy has presented to the running world the possibility that we will soon seen competitive Jamaicans at the longer distances.